A rare 62-year-old Dalmore Scotch whisky made in Scotland by Indian billionaire Vijay Mallya's Dalmore distillery, was bought by an unknown Chinese businessman for a staggering £125,000 (Rs93.7 lakh), making it the most expensive bottle of Scotch ever sold. 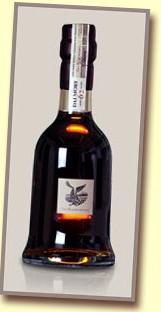 The Financial Times today reported that the bottle of 62-year-old Dalmore Scotch, which had sat languishing for six months in a glass case at Singapore's Changi airport, becomes the most expensive bottle sold.

Only 12 bottles of the Dalmore highland malt Scotch whisky were produced at the Dalmore Distillery at Inverness, Scotland, from a mix of 5 casks from 1868, 1878, 1922, 1926 and 1939 and blended with a connotation of different flavours and aromas, including honey, Seville oranges, coffee, bitter chocolate, cardamom, cloves, ginger and almonds.

The award-winning Dalmore Single Highland Malt Whisky Collection is matured in wooden casks  made either sherry wood or American white oak that along the years and the climate contributes to the flavour of each malt.

Since a majority of vintage wines, champagne and Scotch buyers never taste the bottle they buy, but purchase to add to their collection or for investment, this anonymous Chinese businessman may never know the true taste of this exotic blend.