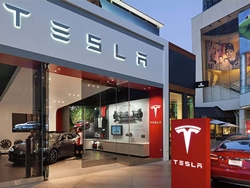 Last year Elon Musk  told investors and over 370,000 customers who put deposits down for a Model 3 that he intended to start building the cars in July 2017.

At the time, many analysts and suppliers said the timeline was too ambitious and would be difficult to achieve, pointing to Tesla's history of missing aggressive production targets.

Musk also told that the company could miss the July 2017 startup target if suppliers do not meet deadlines.

Founded in 1998 by Ma Huateng, Tencent is best known for its WeChat mobile messaging app.

Tencent, which was an early investor in Shanghai-based electric vehicle startup Nio, has a market cap of $275 billion, while Tesla has a market value of $45 billion.