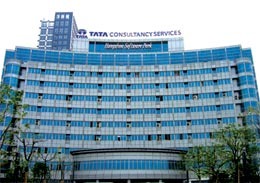 The stock hit a new high of Rs3,499, up 2.7 per cent in intra-day trade, extending its Friday's 6.7 per cent surge, as the company reported better-than-expected March quarter earnings in post market hours on Thursday.

The $100 billion market cap puts TCS in an elite club, as globally there are only 63 other companies in this league, including Amazon and Facebook.

The figure equals the GDP of as many as 128 countries, and is bigger than the total market capitalisation of all the stocks listed on Pakistan Stock Exchange. It equals almost one-third of India's total Budget expenditure for FY19, according to The Economic Times. It is also equal to the defence budgets of India and Japan combined.

TCS announced 1:1 bonus shares, ie one bonus shares of Re1 face value each for every share held in the company to its investors.

Most analysts are now bullish on the stock and have revised their target price. At least half a dozen foreign brokerages increased their price target for the stock by over 15 per cent post the results announcement last week, according to Business Standard.

Brokerages see TCS' positive commentary on banking and financial services staging a comeback and higher growth in digital services as a huge momentum to their double digit growth plans for FY19.

In its recent report, analysts at Nomura, however, have maintained a reduce rating on the stock with a target price of Rs2,750.

"We retain Reduce as we find valuations expensive at ~20x FY20F and see risk to street expectations of ~double-digit constant currency (CC) revenue growth and flattish margins. Our caution stems from: 1) large segments US/BFSI remaining weak, growing at low- to mid-single digits y-y, with clarity on BFSI still a quarter away amid risks from insourcing at large US Banks," Ashwin Mehta and Rishit Parikh of Nomura said in a recent report.