Tata Consultancy Services Ltd (TCS) has reported a net profit of Rs6,904 crore for the fiscal fourth quarter ended 31 March 2018, posting a 4.48 per cent year-on-year growth and a sequential increase of 5.7 per cent. 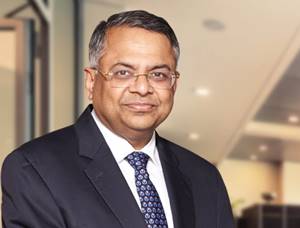 TCS, India’s biggest IT services and consulting firm, had reported a net profit of Rs6,531 crore in the previous quarter ended 31 December 2017 and a Rs6,608 crore net profit in the same quarter of the previous financial year.
Consolidated net sales for the quarter rose 8.2 per cent to Rs32,075 crore compared with Rs29,642 crore in the year-ago quarter. The company had reported a sales growth of 3.93 per cent in October-December and 4.29 per cent in July-September.
The company announced a final dividend of Rs29 per share and proposed a 1: 1 bonus issue of equity shares.
"Strong demand in digital across all verticals and large transformational deal wins made this one of our best fourth quarters in recent years. The strong exit allows us to start the new fiscal on a confident note," said CEO and MD Rajesh Gopinathan.
At the end of March, the software major had a total workforce of 3,94,998 on a consolidated basis. The attrition rate for the full fiscal was marginally lower at 11 per cent while the total attrition rate (including BPS) fell to 11.8 per cent.
While volume growth for the quarter was 2 per cent, TCS said, its operating cash flow at 121.70 per cent of profit was its highest ever.
TCS said 23.8 per cent of its revenue came from the digital vertical, which grew 42.8 per cent on an annual basis. Greater adoption of digital technologies by customers resulted in several large, multipractice integrated deal wins, it said.
"Six of our industry verticals grew above company average in FY18, and 4 in double-digits," Ganapathv Subramaniam, chief operating officer and executive director, said.
"We are executing on our Business 4.0 strategy and that is paying off very well," added Subramaniam in the statement of resullts.
All industry verticals, with the exception of BFSI, grew above company average, with three verticals growing in double-digits YoY. Growth was led by the energy and utilities vertical (+33.7 per cent), travel and hospitality (+25.4 per cent) and life sciences and healthcare (+12.6 per cent).
Continental Europe (+19.1 per cent), UK (+10.7 per cent) and Asia Pacific (+8.6 per cent) led the growth. North America grew 4.9 per cent VoY. The company said it expects strong growth prospects in APAC although it is a diverse market.
For the full financial year (2017-18), TCS said its revenue from operations stood at Rs1,23,000 crore, an increase of 4.35 per cent compared to Rs1,18,000 crore reported in previous fiscal while dollar revenue growth was 8.6 per cent QoQ at $19.09 billion.
Profit during the year declined 1.8 per cent to Rs25,826 crore while operating profit increased 0.6 per cent to Rs30,502 crore but margin contracted by 93 basis points to 24.77 per cent.
The volume growth for the year was at 7.6 per cent while revenue growth in constant currency terms was 6.7 per cent.
As of March 31, 2018, the company has applied for 3,916 patents, including 299 applied during the quarter. Till date the company has been granted 654 patents, it said.
TCS also reported addition of three clients in $100 million plus category, 13 in $50 million slab, 17 in $20 million and 40 in $10 million slots during the financial year. 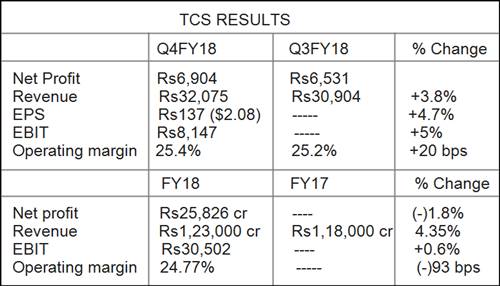