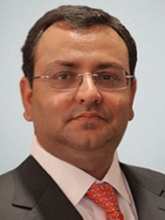 Shareholders of Tata Consultancy Services voted overwhelmingly at Tuesday's extraordinary general meeting (EGM) to oust former chairman Cyrus Mistry as a company director, with 93 per cent of voting in favour of the proposal for Mistry's ouster.

Tata Group has lined up seven such EGMs to decide Mistry's continuance on the boards of group companies.

Although there were dissenting voices among some minority shareholders, the outcome was a foregone conclusion with Tata Sons controlling a 73-per cent shareholding in TCS.

As many as 38 shareholders spoke at the two-and-a-half  EGM, but a majority of them voiced support for Tata while only a handful affirmed support to Mistry.

Independent director Aman Mehta, who officiated the meeting, said Mistry had lost "the trust and confidence" of the promoter group (Tata Sons and Tata Trusts), which had nominated him and it was in the best interest of TCS that he leave now.

The core issue is not just "performance or competence", Mehta said, adding, "It seems to me that the real issue here is one of trust and confidence of the promoter group in its nominated chairman."

"Independent directors of TCS have met separately and have reviewed the whole issue in some details. It is clear to all of us that the current issue can have some materially negative effect on the functioning of the company," he said.

Earlier, in a letter to shareholders Mistry said, "good governance" has been thrown to the wind in the past several weeks and replaced by "whims, fancies and personal agenda".

He said he was "fighting to save the soul of the Tata Group". Mistry's statement was read out at the EGM by the company secretary.

Some shareholders sought details of Mistry's letter and replies  to his accusations, but Mehta wound up the meeting without extending an already prolonged EGM.

"All of you on the board don't think for yourself and depend on someone else for what you think. I have asked three - four pointed questions, where are those answers? You are talking in the air, be specific," Adil Irani, a discontent shareholder, said.

"Can you fire your driver or chaprasi (office boy) like this? He (Mistry) is my chairman, I want specific reasons why he was fired," Irani said amid the din.

In a surprise move, Tata Sons removed Mistry from chairmanship of the company on 24 October, leading to a series of allegations and counter-allegations by both sides in what is described as the biggest corporate battle in recent times.

While Mistry has found support on the boards of other group companies such as Indian Hotels and Tata Steel, some like Tata Motors have been divided.

Six of the big group companies have called for EGMs to oust him from directorships this month.

At the EGM, those supporting the motion to dismiss Mistry as a director gave a slew of reasons including legacy of the Tata Group, value erosion which the events have caused, need for a 'Tata' to continue at the helm and even avoiding bickerings within the small Parsi community.