More reports on: In the news, Management - general, Tata Sons 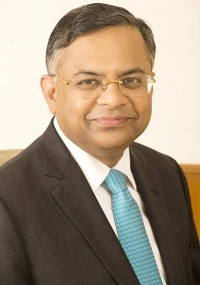 The latest move by Tata Sons, the holding company of the $100 billion salt-to-software Tata group companies, comes at the head of a running boardroom spat with ousted chairman Cyrus Mistry.

The board of directors of Tata Sons, at its meeting today, decided to appoint N Chandrasekaran as executive chairman. His appointment was unanimously recommended by Selection Committee, a company release stated.

Chandrasekaran will take charge from 21 February 2017, the release added.

''Mr Chandrasekaran has demonstrated exemplary leadership as the chief executive officer and managing director of Tata Consultancy Services. We believe he will now inspire the entire Tata group to realise its potential acting as leaders in their respective businesses, always in keeping with our value system and ethics and adhering with the practices of the Tata group which have stood it in good stead,'' the board of Tata Sons said.

Chandrasekaran was the CEO and MD of Tata Consultancy Services since 2009. A Tata lifer, he had joined the company in 1987. He was appointed as a director on the board of Tata Sons on 25 October 2016.

This is the first time that the business empire of the Tatas, whose portfolio includes top ranking firms ranging from Jaguar Land Rover and Tata Steel mills to Vistara, opted to appoint an outsider as group chairman.

Chandrasekaran (63), is also one of the youngest CEOs of the Tata Group.

Under his leadership TCS has generated net profit of Rs6,778 crore (nearly $1 billion) for fiscal third quarter ended 31 December – a 10.9 per cent increase from the comparable quarter of the previous fiscal.

Revenue rose 8.7 per cent from a year earlier to Rs29,735 crore ($4.39 billion), bolstered by rising revenue from digital services, which comprised 16.8 per cent of its total revenues.

The appointment of Chandrasekaran comes more than a month before the deadline of 24 February for the five-member to find a new chairman.

Chandra's appointment as Tata Sons Chairman also comes at a time when the company is fighting a legal battle at the National Company Law Tribunal with Mistry, who has challenged his ouster.

Yesterday, Mistry family-owned two investment firms had filed a contempt application at NCLT against move by Tata Sons to remove him as director and sought an order to restrain the company from going ahead with its planned EGM on February 6 called to remove him.

Tata Sons's board had, in October last, set up a five-member selection committee that included group patriarch Ratan Tata to choose a new chairman within the next four months.