Tata Steel UK on Monday said it has successfully arrived at a settlement on the issue of hiving off the British Steel Pension Scheme into a separate entity, clearing the way for the merger of its European steel business with Germany's Thyssencrupp. 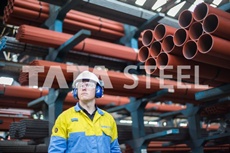 A Reuters report said the German steel-to-elevator group is likely to reach an in-principle agreement with the Tata Group in September to merge its European steel business with Tata Steel.

Tata Steel UK on Monday said it has received confirmation from The Pension Regulator of the UK about the appointment of a Regulated Appointment Announcement (RAA) in respect of the British Steel Pension Scheme (BSPS) Trustee under the terms of a shareholders' agreement.

As part of the RAA, Tata Steel UK would make payment of £500 million, which is equivalent to  33 per cent economic equity stake in the company to the BSPS Trustee under the terms of a shareholder's agreement.

Tata Steel said the new scheme would have lower future annual increases for pensioners and deferred members than the British steel Pension scheme, giving it an improved funding position, which would pose significantly less risk for Tata Steel UK.

The BSPSW Trustee will, in due course, communicate with all scheme members about the separation and the proposed new pension scheme.

Tat Steel said the completion of the RAA followed many months of hard work to provide the most sustainable outcome to the pensioners, current employees and the business.

"I would once again like to extend my gratitude to all the stakeholders - in particular The Pensions regulator, Pension protection Fund, the trustee of the British Steel Pension Scheme, its members, the unions, our employees and the governments of the UK and Wales. Without their significant time and effort, as well as constructive engagement, the process would not have been completed.

"Although much work is still need to ensure the business is competitive in the future, the next step in this pension process involves necessary formalities to set up the new scheme with a lower risk profile following the necessary member consent process led by the trustee. This will take some time to implement given the wide membership base of the scheme. The net financial impact of the RAA, including the payment of the agreed pound £550 million settlement amount will be reflected in the Q2 FY16 financials of the company.

Tata Steel stock cheered the company's decision to conclude its new agreement under which its UK business stands separated from the £15-billion British Steel Pension Scheme (BSPS), rising by Rs21.85 (or 3.30 per cent) to Rs683.15 on the Bombay Stock Exchange (BSE) towards the close of trading.