Tata Steel's Port Talbot chief Stuart Wilkie is to launch a management buyout of the company's operations in the UK, it was announced today. 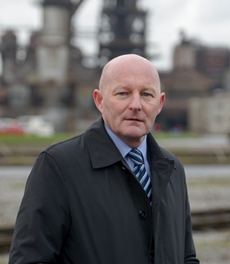 Tata is selling its entire loss-making UK business and has asked for expressions of interest as part of the sales negotiations process.

Wilkie was one of the main people behind a survival plan that was rejected by the Tata board in India and the UK business was put up for sale.

The steel crisis has been driven by falling prices and a global oversupply. In the UK, high energy costs and cheaper Chinese imports have exacerbated the issue.

The steel union Community said it would welcome "prompt discussions with Stuart Wilkie and any management buyout option".

As with any potential buyer for Tata, the management buyout would require significant financial support from the UK government.

"It's believed though that any management buyout would involve retaining the blast furnaces and making steel from scratch as opposed to the proposal by Liberty to turn it into a recycling facility," the BBC commented.

Tata Steel directly employs 15,000 workers in the UK and supports thousands of others, across plants in Port Talbot, Rotherham, Corby and Shotton.

The UK operations are losing about £1 million a day, and although Tata has not set a deadline for a sale, it has stressed it does not want a "long period of uncertainty".

Dr Kath Ringwald, a senior lecturer at the University of South Wales' faculty of business and society, said there were "enormous difficulties ahead" but the buyout would be welcomed by everyone.

She told BBC Radio Wales, "It is a very different plan; for example the Liberty plan is talking about no redundancies. Whether or not this plan could succeed on the same basis we don't know but it is a very difficult time in market conditions to be tabling an ambitious plan for re-investment."

Gupta has said he is still in the early stages of reviewing a takeover and there was no certainty he would make a bid.

Tata Steel said it was not publicly naming or confirming any potentially interested investors or bidders.

The government has resisted calls from unions and opposition politicians to nationalise the Port Talbot plant, Britain's biggest steelworks, to safeguard thousands of jobs.

However, last week the Business Secretary Sajid Javid raised the prospect of government involvement in the sale, possibly through "co-investing with a buyer on commercial terms".

On Monday he joined ministers and trade officials from 30 countries at a meeting in Brussels to discuss the global glut of steel.

Although that meeting broke up without agreement, Javid said that China had vowed to address "a problem of overcapacity in their country".