Tata Steel Minerals Canada, a subsidiary of Tata Steel Ltd, has entered into a strategic alliance with Labrador Iron Mines Holdings (LIM) of Canada, under which the two companies will cooperate in their respective iron ore mining operations. 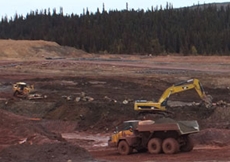 The agreement also includes transfer of 51 per cent stake in the Howse mine, one of the deposits owned by the Canadian entity, for C$30 million.

The Howse deposit is estimated to contain 28 million tonnes ore reserves. TSMC also has an option to further increase its ownership of Howse deposit to 70 per cent for a consideration of additional C$25 million.

Under the agreement, Tata Steel Minerals Canada and Labrador Iron Mines Holdings Limited will co-operate in their respective iron ore operations in the Labrador Trough and in due course enter into definitive agreements to formalise the arrangement.

The strategic relationship will include multi-part co-operation agreements in areas of logistics; property rationalisation and various ancillary mutual support and potential off-take arrangements.