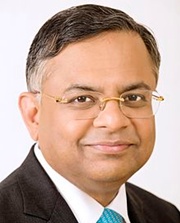 Mistry also hinted that he may be preparing to open another legal front challenging the decision, reports quoting officials said.

Tata Motors has now become the first listed Tata company to bring the incoming Tata Sons chief as the chairman.

''The board of directors today (Tuesday) appointed Natarajan Chandrasekaran as additional director and chairman of the board with immediate effect,'' the company said in a regulatory filing.

The appointment comes five days after Tata Sons announced Chandrasekaran as its executive chairman, after the board finally decided to oust Cyrus Mistry from chairmanship.

Chandrasekaran, who will take charge as Tata Sons chairman on 21 February, will also be chairman of UK-based Tata Motors unit Jaguar Land Rover.

For Tata Motors JLR has been the driving force for quite some time now. JLR's profit after tax for the half year ended September 2016 stood at 400 million pounds (1,143 million pounds in the corresponding period last year).

Against this, Tata Motors posted a net loss of Rs430 crore ($65 million) in the quarter ended September, compared with a Rs3,290 crore profit a year earlier.

Tata Sons plans to raise its ownership over time in five of its largest businesses, including Tata Motors, Indian Hotels and Tata Steel. The main agenda before Chandrasekaran will be to prepare a plan to protect group companies from potential takeover threats, say reports.