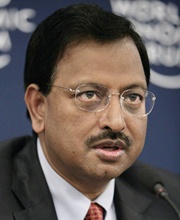 The Securities Appellate Tribunal (SAT) has stayed the Rs1,849-crore penalty imposed by the Securities and Exchange Board of India (Sebi) on founder-chairman of erstwhile Satyam Computers B Ramalinga Raju and four others, but upheld a ban on them from accessing the markets.

The tribunal asked Sebi to explain the reason for imposing such a large amount as part of a disgorgement order and directed it to file an affidavit by 7 November.

Investigations into the country's biggest corporate fraud had unearthed total disgorgement amount of over Rs3,000 crore.

The tribunal gave Raju and four others named in the scam - Raju's brother B Rama Raju (the then managing director of Satyam), Vadlamani Srinivas (ex-chief financial officer), G Ramakrishna (ex-vice president) and VS Prabhakara Gupta (ex-head of internal audit) -  time till 15 December to file counter-affidavits.

The tribunal posted the matter for further hearing in December, when it will decide whether to admit the pleas of the Raju brothers and others against Sebi order

Sebi had, on 15 July this year, barred Ramalinga Raju and the four others from accessing the market for 14 years and asked them to return Rs1,849 crore in unlawful gains with 12 per cent interest. The total a disgorgement amount in the scam stood at a little over Rs3,000 crore.

Sebi had asked them to pay up within 45 days of the order - while interest would be levied from 7 January 2009, the day the mega-scam came to light through a letter written by Raju himself.

The disgorgement amount could exceed Rs3,000 crore after taking into account the applicable interest payments.

In its 65-page order, Sebi said these five persons ''have committed a sophisticated white collar financial fraud with pre-meditated and well thought out plan and deliberate design for personal gains and to the detriment of the company and investors in its securities''.

The regulator, which was empowered through an ordinance for passing disgorgement orders, further said that the ''financial frauds as found in this case are inimical to the interests of the investors in securities and endanger the market integrity''.

Instead of paying up, the Raju brothers moved the SAT last Friday.