Rio Tinto and its partners, have approved the $5-billion second-stage expansion of the Oyu Tolgoi copper and gold mine in Mongolia. 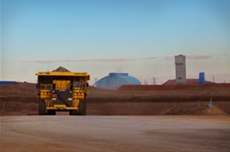 The development of the underground mine will start in mid-2016 following the approval of a $5.3 billion investment by Rio and its partners and the recent grant of all necessary permits.

First production from the underground mine, which has an average copper grade of 1.66 per cent purity or over three times more than the open pit, is expected in 2020.

Oyu Tolgoi is 34-per cent owned by the government of Mongolia. Turquoise Hill Resources owns 66 per cent, of which Rio Tinto owns 51 per cent.

The underground expansion of the mine has been delayed since the past three years amid differences in funding the expansion between Rio Tinto and the Mongolian government and other disagreements like tax disputes.

Around $6.4 billion has been invested to develop the open-pit mine, concentrator and associated infrastructure at Oyu Tolgoi, with an additional $500 million of capital costs for initial development of the underground mine.

''Today's investment takes it to another level and will transform Oyu Tolgoi into one of the most significant copper mines globally, unlocking 80 per cent of its value,'' said, Jean-Sébastien Jacques, deputy chief executive of Rio Tinto.

The Oyu Tolgoi copper and gold mine in Mongolia's Gobi desert is thought to be one of the world's largest untapped copper and gold deposits. It contains approximately 37 million tonnes of copper and 1,300 tonnes of gold in measured, indicated and inferred resources.

Rio Tinto has estimated that the average annual output from the Oyu Tolgoi mine to be around 540,000 tonnes of copper and 670,000 ounces of gold over a 27-year life and the project could account for as much as 5 per cent of Mongolia's gross domestic product.

Rio Tinto, which had initially acquired a 19.9-per cent stake in Turquoise Hill in October 2006 in order to jointly develop the Oyu Tolgoi project, has since gradually raised its stake to 51 per cent, with a long term plan of controlling the entire project.