Jio is disruptive, but a viable investment model: Mukesh Ambani

Reliance Jio is not a gamble, but a well thought out and well-engineered business, Reliance Industries chairman Mukesh Ambani said on Monday, even as he compared the denial of points of interconnection by incumbent telecom companies to Jio as something similar to meritorious students ''getting ragged'' by jealous students. 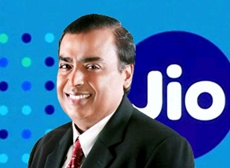 Replying to a question on the justification of Rs1,50,000 crore investment in the telecom venture, Ambani said it is in fact a Rs2,50,000-crore business ecosystem and that it is worth all the money and investment.

Reliance Jio follows an internet focused telecom business model where data is being offered at a discounted rate while voice calls come almost free of any charges. Jio offers high-speed 4G services with focus on data.

"It is no punt. It is a well thought-out, well executed, well engineered ecosystem. It is a Rs 2,50,000 crore investment," Ambani said at 'Off the Cuff' show organised by The Print, a digital media outfit owned by senior journalists Shekhar Gupta and Barkha Dutt.

Ambani said Jio, being a disruptive venture, had troubles with the regulator and the incumbents. "Yes we had troubles" and compared it to a bright student getting admission into prestigious institute on merit but getting ragged in the hostel for being meritorious.

"You have to take it in the right spirit. There is a principal and there is an ecosystem so there is a governance system...I've no problem as long as I or Reliance get ragged, you are the big boys and you can take it but the consumer should not suffer and I think that is what Jio is doing."

Ambani had, at the launch of Reliance Jio last month, said the company had invested Rs1,50,000 crore into his new venture. But that figure has increased to Rs2,50,000 crore.

On the Reliance Jio initiative, Ambani said it was again conceived because of bad connectivity in the Ambani home.

Ambani said the idea of a data-focused telecom venture struck him when his daughter Isha, back in India after her higher studies in Yale, US complained of the internet's connectivity problems across operators.

I had "all" the available Internet options at home at the time, but none was dependable and realisation came that there was scope for disruption in this market.

"You have to take it in the right spirit. There is a principal and there is an ecosystem so there is a governance system," Ambani said. "I've no problem as long as I or Reliance get ragged, you are the big boys and you can take it but the consumer should not suffer and I think that is what Jio is doing."

On the philosophy behind Jio, Ambani said, the company must provide value to the consumers beyond just making money, adding that there is a duty to the shareholders to increase the stock value. However, he did not go into any details about how Reliance will accomplish this, and instead said, "as usual, we will prove the financial community wrong."

"We will prove all (financial analysts) wrong, just watch our quarter by quarter results," he said. "I am in a fortunate position of pursuing my conviction, with a board to stand behind me."

Financial markets have typically been wrong about technology companies, he pointed to the cases of Apple and Google. "We will prove all (financial analysts) wrong, just watch our quarter by quarter results," he said. "I am in a fortunate position of pursuing my conviction, with a board to stand behind me."

In the digital world, individuals interact with servers and therefore are running and are being billed all the time compared with a call, which only starts to tick when both the caller and recipient come online.

Ambani said, just as electricity increased muscular ability to move things mechanically, the digital transformation has brought the world to the brink of the ability to augment brain power.

On the current Indian government Ambani said, "India was fortunate to have Narendra (Modi) Bhai's guidance." He said that the current rhetoric was swept with negativity and cynicism that "we owe to ourselves" to reverse. He further added that it has become nearly fashionable to be negative, but that was pulling the nation's youth's morale down. The government the moment is sticking with the right thing to do irrespective of who it affects, he said citing the example of retaining the Adhaar card initiative from the previous regime.

Speaking on the ban on Pakistani artists in Indian films, Ambani said while he did not understand the politics around it, it was clear to him that "India is for Indians first."

In a lighter vein he said that at 9PM in the evening he followed Arnab Goswami's news show and liked it.om