On the back of a 25-per cent increase in international sales, Royal Enfield – which makes the iconic Bullet motorcycle in India - is stepping up efforts to develop models in the 250 cc-750 cc range specifically targeting markets outside India, especially the US and the UK. 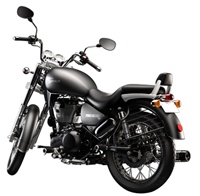 Siddhartha Lal, managing director and chief executive of Eicher Motors Ltd, which owns the Royal Enfield brand, said that the company would aim at foreign buyers who want to move over from heavier high-end bikes to those in the mid-range as an additional option. ''With global consumers in mind, we are working on multiple platforms to develop new models,'' Lal said.

The company sold 4,400 high-end motorcycles in the global markets, which was a growth of 25 per cent over 2012. During the same period, motorcycles sales in the domestic market grew by 55 per cent to 178,121 units.

Eicher will pump in Rs600 crore for capacity expansion and development of global products, besides revising production target upwards to 280,000 units for 2014, Lal said while announcing the Chennai-based company's fourth-quarter and full-year results up to December. The company follows the calendar rather than the Indian financial year which ends in March.

"Given the growing demand for our motorcycles worldwide, we are working towards maximising the production at Oragadam (near Chennai) that will take the eventual production to over 500,000 per year," said Lal said.

Eicher said that the next phase of expansion at Oragadam is already under way and is expected to be completed by the end of 2015.

At a time when most of the other two-wheeler manufacturers are holding back capacity expansion plans, Royal Enfield is increasing capacity on account of strong demand for the vehicles and a reduced waiting period for delivery. It has registered unit sales growth of 57.03 per cent, with sales of 178,121 units in 2013 compared to 113,432 units in 2012.

The company did a global launch of its Continental GT in September last year in UK, which was followed by its India launch in November. It exports to markets like Europe, the USA and the UK, and is also looking at capturing the growing demand for bigger bikes in emerging markets.

In its financial results, Eicher Motors reported a consolidated a net profit of Rs96.2 crore, a growth of 32.3 per cent over the same quarter in the year-ago period.

Lal said that the company would continue to be entirely focused on the mid-sized motorcycle segment (250 cc-750 cc) over the next five to seven years and would essentially target the 50-plus age group riders in the international markets. By Indian standards of course, the Bullet is considered a heavy rather than a mid-sized bike, but international standards are different.