As the Clasic 500 glided onto the tarmac, it was flanked by the Classic 350. 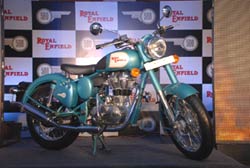 The engine and powertrain design of the Classic 500 have been originally validated by Dr McGuigan of Cranfield University, and Ricardo plc, UK. The design team of Royal Enfield has actively collaborated with, Xenophya Design, UK, from the concept stage itself.

The chassis engineering was done with Vepro, UK, Engines Engineering, Italy and the fuel injection system is from Keihin, Japan. The final validation of the complete vehicle was carried out by ARAI, Pune.