More reports on: In the news, ADA Enterprises / ADAG

Jai Anmol Ambani, the elder son of Anil Ambani Group chairman Anil Ambani, has joined the board of group company Reliance Capital as an additional director. 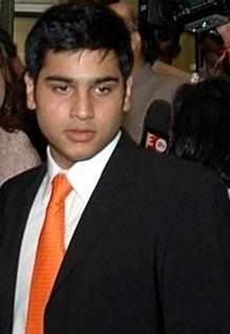 Anmol Ambani, 24, has been working in various businesses within Reliance Capital since 2014.

The third generation Ambani scion was inducted into the board of Reliance Capital as an additional director at a board meet on Tuesday.

The only family member to join the Anil Ambani group board, Anmol will become full-time executive director at Reliance Capital's annual general meeting next month.

He has been involved in internal business reviews across companies and been part of interactions with Nippon Life for increasing stakes in Reliance Life Insurance and Reliance Capital Asset Management.

Anmol's cousins, the children of Mukesh Ambani, Akash and Isha had taken up board positions in the telecom and the retail divisions of Reliance Industries a couple of years ago.

A statement from Reliance Capital said Anmol was recommended by the nomination and compensation committee of the board of the company, which comprised largely of independent directors.

Anmol, born on 12 December 1991 in Mumbai, studied at the Cathedral and John Cannon School, Mumbai, till 2007 and thereafter, completed his schooling from Seven Oaks School, UK, in 2009.

After completing school, Anmol did a summer internship with Reliance Mutual Fund (RMF) for two months.

During this time, he worked with the research department of RMF equity team. Anmol completed his undergraduate studies - BSc in management - from Warwick Business School, UK.

Known to have a keen interest in economics, Anmol took time to travel the world before joining Reliance Capital in 2014.

"The last two years have given me great learnings about the financial services business. I look forward to using this experience to scale up our businesses and contribute towards their growth and progress," Anmol said after the announcement.