ONGC to sell stake in IOC, GAIL, but only when price is right

Oil and Natural Gas Corp (ONGC) has got approval from the government to sell its stake in Indian Oil Corp (IOC) and Gas Authority of India Ltd (GAIL) to help fund the Rs36,915 crore acquisition of Hindustan Petroleum Corp, according to a PTI report. 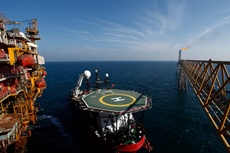 Citing sources with direct knowledge of the issue, the report says the government gave state-owned ONGC approval to sell its shareholding in IOC and GAIL earlier this month, but the company is waiting for the right price to offload the shares.

For the moment ONGC will fund the Rs36,915 crore acquisition of government's 51.11 per cent stake in oil refining and marketing firm Hindustan Petroleum Corp Ltd (HPCL) from the about Rs12,000 crore cash it has and short-term borrowing.

The sources said ONGC is a zero-debt company and wants to retain that status. The short-term loan it is availing of the provision for pre-payment without any penalty. It plans to pre-pay ac one-year tenor loan it is taking by selling IOC and GAIL shares, they said.

ONGC had held talks with Life Insurance Corp of India (LIC) for selling IOC and GAIL shares but the state-owned insurer insisted on buying them at a 10 per cent discount to the prevailing price. So ONGC has decided to offload the shares in open market, the report says.

ONGC acquiring HPCL would create India's first integrated oil company. This would be ONGC's biggest acquisition and second buyout this fiscal after its Rs7,738 crore acquisition of an 80 per cent stake in Gujarat State Petroleum Corp's Krishna-Godavari Basin gas block.

ONGC chairman and managing director Shashi Shanker had on Sunday stated that the company's board has approved raising the borrowing limit from Rs25,000 crore to Rs35,000 crore. This will be the company's first ever debt.

"We will use our (Rs12,000-13,000 crore) cash first and the liquid assets and debt will be last," Shanker had said. "This order can change, because we won't sell the liquid assets in distress. Also, we have offers for over Rs50,000 crore debt at very competitive rates, both foreign currency and local."

Shanker had said the company paid less than the acquisition price recommended by the company's valuation adviser, EY. He however refused to share details.

The Rs473.97 per share ONGC is paying to the government is 14 per cent higher than Friday's closing price of HPCL and over 10 per cent of the 60-day weighted average of the HPCL scrip. PTI's sources said while the government was seeking as much as Rs69,000 crore for selling controlling stake in HPCL, EY had put HPCL's valuation at Rs475 a share plus a premium for getting the controlling stake. The outside advice the company took from Citi put the price at Rs500 per share.

The stake sale will help the government cross its sell-off target for the first time and would help it stick to the fiscal deficit target of 3.2 per cent of GDP. The government had set a target of Rs72,500 crore from disinvestment proceeds this fiscal. Before the ONGC-HPCL deal, it had collected Rs54,337.60 crore.

HPCL will add 23.8 million tonnes of annual oil refining capacity to ONGC's portfolio, making it the third-largest refiner in the country after IOC and Reliance Industries. ONGC already is majority owner of MRPL, which has a 15-million tonne refinery.