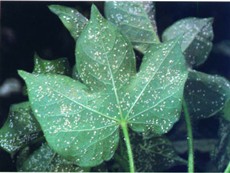 But the extensive whitefly attack on the Bt cotton variety in Punjab and Haryana have raised concerns over the vulnerability of the genetically-modified seeds that yield nearly all of the cotton in the world's top producer.

The damage caused by the whitefly attack on the Bt cotton variety in Punjab and Haryana is likely to be extensive that this has even been seen as the cause of farmer suicides.

Although the impact of production loss in the two states on overall cotton crop in the country is expected to be low, the pest attack has rekindled a debate on the efficacy of GM crops.

US biotech giant Monsanto that developed Bt cotton claims to have tweaked it to produce its own insecticide to kill pests like bollworms, has so far withstood criticism.

But, two years of drought have encouraged the spread of whitefly against which the strain has no resistance. The winged pest damages the leaves of the cotton plant by sucking out fluid.

"Bt technology is effective only against specific types of bollworms that are known to cause maximum yield loss and economic damage to the cotton crop," said a spokesman for Mahyco Monsanto Biotech (India) Pvt Ltd.

The joint venture between India's Mahyco and a local unit of Monsanto has sub-licensed production of its Bt cotton strains - first approved for sale in India in 2002 - to 28 seed companies.

"Currently there are no approved agriculture biotechnology solutions to counter the infestation of whiteflies. The recommended solution for farmers is spraying of approved pesticides."

The Bt seeds cost more than older cotton strains and must be bought anew each year by farmers, thus creating a dependency on the seed companies.

But, the companies that market the GM cotton argue that growers end up better off because they get higher yields and save money on pesticides

The farmers' union aligned to the ruling party at the centre, is stepping up opposition to GM cotton and is seeking a ban on it. Besides, they are opposing the introduction of crops like GM mustard, which is now in development stage.