Car market leader Maruti Suzuki India today announced the launch of S-Cross, a crossover of a sedan into a sports utility vehicle, as it aims to catch up with rivals in the new models market to support growth. 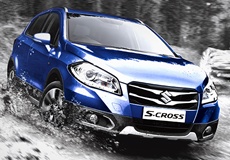 S-Cross is being offered in two diesel engine options - DDiS 200 and DDiS 320 to offer massive torque, power and superior ride and handling, Maruti Suzuki said in a release.

The base diesel model of the S-Cross will be priced at Rs834,000 ($13,070) and will be sold through a new network of showrooms for premium models.

S-Cross will be the first model to be retailed exclusively through Nexa, Maruti's new automotive sales network launched recently.

With its bold cross-over looks, premium interiors and rich features, S-Cross will stand out as a premium offering, the company said.

''S-Cross is built to be zippy on city roads and comfortable on varied terrains. The high performance suspension, enhanced handling cornering performance and stability, together make S-Cross a sheer thrill to drive.''

''The combination of massive torque, power and superior ride and handling is bound to delight customers. By offering power and performance, and the comfort and refinement of a sedan, S-Cross creates the new category of "premium cross-over" in India,'' Maruti Suzuki stated in a release.

"We are taking various initiatives to achieve this goal. An important initiative is launching new cars and entering new segments," managing director, Kenichi Ayukawa told reporters at the launch of the S-Cross - a crossover between a sport-utility vehicle (SUV) and a sedan.

''The S-Cross design embodies the three key themes of emotion, quality and aerodynamics. A characteristic and bold crossover shape, dynamic and strong character lines, emotionally appealing styling and several sophisticated touches, all combine to create a highly distinctive look for the S-Cross,'' the release added.

The company targets monthly S-Cross sales of around 4,000, well below the 20,000 average for its flagship Alto small cars and lower than the 5,000 unit sales targeted for its premium Ciaz sedan, launched last October.

Maruti, which has set a target of nearly doubling its annual sales to 2 million vehicles by 2020, lags new vehicle models needed to push growth in the fast-growing SUV segment.