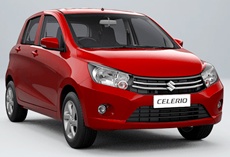 The car is fitted with next generation K10 (K10 Next) engine and the new technology promises superior drive experience to the users, the company said.

''Maruti Suzuki Celerio is the latest example that brings path-breaking auto gear shift technology in cars for the first time and that too in the country's most popular compact car segment,'' Kenichi Ayukawa, managing director and CEO, MSIL, said on the sidelines of Auto India exhibition in New Delhi.

The auto gear shift, christened EZ Drive, is also a first for India amongst passenger cars.

Among several benefits, Celerio comes with a best in class fuel efficiency of 23.1 kmpl, for both, auto gear shift and the manual transmission variants.

With Celerio, the Company is keen to change these perceptions and raise the technology bar.

''The Celerio promises a new, convenient and fun to drive experience, with top class fuel efficiency, at a highly attractive price and low maintenance cost. We are confident that Celerio will soon become a popular choice among customers as they enjoy the benefits that this new technology brings,'' Ayukawa added.

The Celerio is stylish on the outside and has roomy, spacious and functional interiors with a large boot. Offered in six variants, including two with auto gear shift.

Auto gear shift is a departure from the traditional configuration, as it has only two pedals. The two pedal drive relieves the driver from synchronising between clutch and gear shift lever and brings immense value in start-stop traffic conditions.

Celerio is available in four variants -  LXi  Vxi  Zxi  Zxi – and a varied colour spectrum, including 3 new ones.