Maruti Suzuki is all set to launch the Celerio, a small car with an affordable automatic transmission, which is also frugal on fuel consumption with an ARAI-certified mileage of over 23 kmph under test conditions. 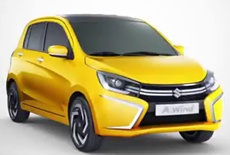 The B-segment car from the Maruti Suzuki stable, due to be unveiled next month, will replace the A-Star globally while it would be sold alongside Estillo in India.

The Celerio will take on B-segment peers such as the Hyundai Grand and i10 and the Nissan Micra.

However, its forte will be affordable automatic transmission and fuel economy - the main concerns of the car user.

But driving the Celerio will be like driving any conventional automatic. There is no clutch pedal and the gear knob is just as it is in a regular automatic, except for the mild shift felt on changing the gears.

This ensures the automatic version delivers as much mileage as the 5-speed manual transmission variant.

The Celerio, which features a tall-boy design with a short bonnet, has been built on a completely new platform and will only be offered with a petrol engine - the K10B engine, which is currently used in the Alto K10, Wagon-R and A-Star.

Celerio's auto-shift hatchback segment is likely to be priced at a Rs3 lakh to Rs5 lakh plus range.

Hatchback Celerio's rear design is simple but contemporary while the cabin and dashboard layout gives it a modern, upmarket look.

While the weight has been kept within 830 kg, Maruti Suzuki has succeeded in optimising the car's aerodynamism.

The engine has also been tuned to reduce frictional losses.