Maruti Suzuki India continued its steep downward slide in car sales, as monthly sales for November slumped 18.5 per cent over the previous year. 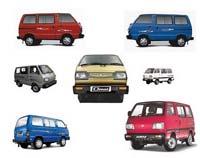 Maruti continues to be billed as India's top-selling carmaker; but its market position has been looking increasingly vulnerable over the last six months, as its sales have been continuously sliding while other carmakers show small gains or minor losses of market share.

The boom in car sales witnessed till a couple of years ago has flattened due to rising interest rates on loans, higher input prices, and several rounds of petrol price hikes.

Maruti has been particularly hit by the labour troubles at its flagship plant at Manesar in Haryana, which reached flashpoints in June and October. Sales in October slumped by more than half - its worst monthly figures in a decade.