According to the country's largest carmaker Maruti Suzuki India, operations at its Manesar plant continued to paralyse production by the ongoing workers strike, which entered its 12th day, with the situation remaining unchanged since yesterday. and . 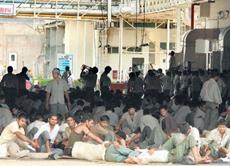 The company's production was down by 10,200 units till yesterday, which translated into the loss of around Rs510 crore.

Yesterday, Haryana Labour Department officials conducted a number of rounds of meetings with the company management and the striking workers, however a scheduled joint discussion comprising all parties did not take place.

According to Shiv Kumar, the newly formed Maruti Suzuki Employees Union (MSEU) general secretary, a meeting was held with Gurgaon deputy labour commissioner in the evening. He added that the labour commissioner was supposed to be accompanied by the management but they held their meeting at a different place and the joint meeting did not take place.

Meanwhile, the All India Trade Union Congress (AITUC), which is leading the agitation from outside along with other unions such as the Centre of Indian Trade Unions (CITU), said the five-member joint committee formed in support of Maruti's striking workers would meet in the afternoon today to take a decision on its future course of action.

A two-hour tool-down strike had been planned by workers in the  Gurgaon-Manesar industrial belt yesterday, morning, to support of Maruti's workers at the Manesar plant.

However, the symbolic gesture was postponed by a day following an appeal from Haryana chief minister Bhupinder Singh Hooda.