Mumbai: The Indian market has been so good for Japan's Suzuki Motor Company, Suzuki India, parent company of Maruti Suzuki India, formerly Maruti Udyog, that on hindsight, it feels that it should have opted for a 100-per cent stake in its Indian subsidiary, instead of a mere 26 per cent in 1982-83 when it entered into a joint venture with the Indian government.

India has proved to be the world's most competitive and economical manufacturing base for its small cars. Little wonder Osamu Suzuki, Chairman and CEO of Suzuki Motor Corporation, wants to make up by making India its manufacturing hub for small cars for the world. 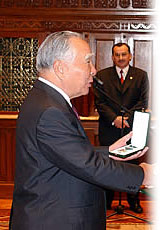 Osamu Suzuki, chairman and chief executive officer, Suzuki Motor, and recipient of the Padma Bhushan, said in a speech read out in absentia by Shinzo Nakanishi, MD and CEO of Suzuki Motors (India), said, "In fact, at that early stage, Mr. O Suzuki, who was in the helms then, ruled out putting in any money in the joint venture; instead, he opted for providing only the much-needed technology and to bring in Japanese work culture,"

The lecture, "Suzuki's business development in India, manufacturing in India", was organised jointly by Indian Merchants Chamber and Consulate General of Japan as part of the chamber's centenary year lecture series and also to celebrate India-Japan Friendship Year 2007.