Mahindra today launched its new compact SUV XUV300, which is expected to pose a big challenge to established brands like the Honda WR-V, Maruti Vitara Brezza and Tata Nexon. 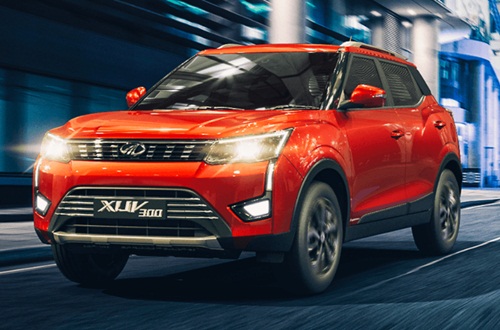 The Mahindra XUV300 is based on the Ssangyong Tivoli, but is in a sub-4 format in keeping with vehicle tax norms.
Compared to its compact SUV competition in India, the XUV300 is more spacious on the inside thanks to a comparatively longer wheelbase and overall width. The Mahindra also sports the thickest tyres in its class.
While the XUV300’s turning diameter is the same as that of the EcoSport; the Nexon and Vitara Brezza sport a 10.2m and 10.4m turning circle, respectively. In addition, the XUV300 has the smallest fuel tank and boot capacity (with the rear seats in place) amongst the lot.
Mahindra is offering two engine options – a 1.2-litre, four-cylinder, turbo-petrol mill and a 1.5-litre, four-cylinder, turbo-diesel motor – mated to a single 6-speed manual gearbox. Mahindra claims class-leading torque figures (200Nm for the petrol and 300Nm of the diesel) for the XUV300. Fuel efficiency for the XUV300’s petrol and diesel engines are 17kpl and 20kpl, respectively.
With four variants and six colour options across both petrol and diesel versions, the XUV300 boasts of first-in-segment dual zone AC, front parking sensors and steering modes.
The XUV300 will offer features like disc brakes, dual zone climate control with memory function and steering modes. In addition, the top-of-the-line model also gets white and black interiors, 7.0-inch touchscreen system with Apple CarPlay/Android Auto as well as a reverse parking aid. All variants of the car get four airbags and ABS with EBD while the top-of-the-line W8 (O) variant gets seven airbags.
The SUV is priced from Rs7.90 lakh to Rs10.80 lakh (ex-showroom, India), the W8 (O) will come at an additional price of Rs1.19 lakh.
Mahindra has already received over 4000 bookings for the XUV300 even before the price announcement.

Mahindra XUV300 has received 4000 bookings ahead of its launch. According to some media reports, the company has received over 60,000 enquiries across the country for the compact SUV.
MORE REPORTS