Mahindra & Mahindra on Tuesday unveiled its first driverless tractor, unfolding new possibilities in farming and redefining the mechanisation for farmers. 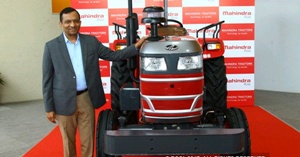 The autonomous tractor will aid precision farming, increase productivity, improve quality and facilitate coverage of large tracts of the land, the company said.

The tractor, developed at the company's R&D centre Mahindra Research Valley near Chennai, will be officially launched in three phases - first with driver assist, then quasi-driverless and finally a completely driverless model.

The first version - driver assist - will launch in February 2018 followed by two other modes during next year, said Pawan Goenka, managing director, M&M.

''There are two big challenges before us - getting the government's approval and then bringing down the cost to make it affordable for Indian farmers. We hope the government will soon draw a framework and then make policy changes to enable us to launch this innovative technology in India. We don't see any regulatory hurdles for the first two phases of this innovative product technology,'' he said.

Goenka said due to import of certain components, fixing a price can be a challenge during the first phase. ''Our R&D centre is working hard to ensure that the prices are affordable,'' he said.

''The product, which is expected to redefine the mechanisation process of Indian farmers in a big way, has been targeted at global markets too,'' he added. ''We will export this technology to the US, Japan, Turkey and Finland among other countries which have similar farming as well as cultivation activities.''

The tractor technology, he said, can fit all models up to 150 HP and be utilised extensively in a landholding of 50 hectares. ''Unlike in developed markets like Europe, we have brought in this technology targeting small farmers who have small landholding,'' he said.

Some of the unique features of this driverless tractor include autosteer (GPS-based technology that enables a tractor to travel along a straight line); auto-headland turn (enabling the tractor to orient itself along adjacent rows for continuous operation without any steering input from the farmer); and geofence lock (preventing the tractor from going outside the boundaries of the farm).

Goenka added that the company will be taking part in the government's tenders of electric cars, electric autorickshaws and electric buses, which will be out soon. ''We are working on a 9-metre electric bus model and will launch the same soon. Hence, we are well-equipped to take part in the ensuing tenders,'' Goenka said. The company is also working on an electric tractor version.

According to The New Indian Express, Goldman Sachs had in 2016 predicted that farm technologies could become a $240-billion market opportunity for small driverless tractors, which they estimated is a $45 billion market.

Last year, at the company's annual general meeting Anand Mahindra, chairman and managing director of the Mahindra Group, had said, ''I have stressed in the recent past  we must focus on developing autonomous, driverless commercial vehicles.''