The Mahindra Group is planning a big expansion of its renewable energy business, raising its total generation capacity to 500 MW of solar power by March 2016 from the current 180 MW. 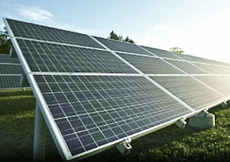 The group has also committed investment to the tune of Rs4,500 crore over the next three-to-four years.

With the government raising its target for solar energy by 33 times to 100,000 MW by 2022 to offset the rising power deficit and overcome the frequent outages, the Mahindra group sees big opportunity in the renewable energy space.

The Mahindra group, which has interests in a number of sectors, including automobiles, technology and finance, had in 2011 formed a separate unit offering off-grid solar power solutions. This, however, is the smallest business of the $17-billion Indian conglomerate.

And now, with the Modi government raising renewable energy targets, India would require Rs30,00,000 crore ($200 billion) investments to meet the 2022 target. While the government expects half of that investment to come from foreign investors, Mahindra expects big scope for local investors in the renewable energy sector, including solar power.

US President Barack Obama on Sunday pledged to support this ambitious goal through additional funding, although the major portion of the investment needed for the renewable energy programme would remain unmet.

Foreign companies such as US-based First Solar and SunEdison Inc already have sizeable businesses in India. First Solar's biggest projects in India include a plant with local firm Kiran Energy Solar Power and the Mahindra Solar One plant.

Others like Canadian Solar, China's JA Solar and JinkoSolar Holdings plan to invest in the country.