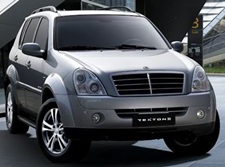 Mahindra, which emerged as the preferred bidder for SsangYong in August 2010, will now hold a 70 per cent stake in SMC, for which it has paid $463 million (Rs2,105 crore).

With the new management taking control, SMC will invest over 240 KRW (Rs960 crore) this calendar year on product development and brand building. The firm will increase investment in product development by 70 per cent in 2011, as compared to last year, at over KRW 200 billion (over Rs800 crore).

It will also invest over 40 billion KRW (about Rs160 crore) for brand building in Korea -- a 60 per cent increase over 2010 -- and increase overseas brand investment by over four times in 2011.

"These investments will be funded by SMC's internal accruals. After the debt restructuring SMC's balance sheet is clean. Although it is unlikely that it will need debt for this investment, but if needed, it can raise," M&M president, automotive and farm sector, Pawan Goenka, told PTI from Seoul.

He said Yoo-il Lee has been appointed as the new chief executive officer of SMC, while Dilip Sundaram from Mahindra will be the new chief financial officer.