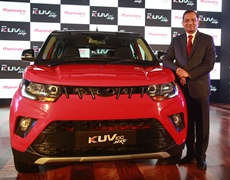 Indian auto major Mahindra & Mahindra (M&M) has finally received the much delayed safety and emission certificate from the US Environmental Protection Agency (EPA) to sell its compact diesel pick-up truck in the US market, but legal issues could still delay the launch.

M&M president (automotive) Pawan Goenka had said in May 2010 that the company would launch the compact diesel pick-up truck in the US by the end of the year to become the first Indian company to sell an Indian-made vehicle in North America.

M&M will be selling two models in the US, the TR20 and TR40 of 2011 model year. Both will be powered by M&M's modified version of the mHawk 2.2-liter four-cylinder diesel engine.

M&M has till date built 175 prototypes in India and tested 30 in the US. The pick-ups are currently being sold in Europe, Africa and South America.