The company is currently displaying the Logan Emerald (LPG Car and Eco Concept), the fully loaded Logan (an accessorized version) and the Steppe (a spacious Concept Car meant for long road journeys.)

Rajesh Jejurikar, managing director, Mahindra Renault, said, "Today, with increasing numbers of vehicles on the roads, issues such as global warming have assumed greater importance. The Logan Emerald is part of our endeavour to reduce our carbon footprint by improving fuel efficiency, reducing CO2 emissions and developing feasible alternatives to petrol and diesel." 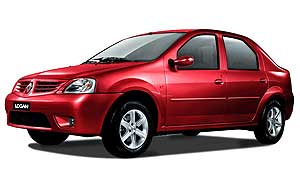 The Logan Emerald is Mahindra Renault's first LPG powered vehicle. The car comes equipped with an LPG kit developed in technical collaboration with Renault engineering and Landi Renzo. The kit is currently undergoing evaluation tests and Mahindra Renault hopes to introduce it in the second quarter of this calendar year. The kit will be priced between Rs35,000 and Rs45,000 with a tank capacity of 42 litres.

The fully loaded accessorised Logan
The sophisticated purple tones and brand new interiors and exteriors of the fully loaded Logan added a touch of royalty and style to the car displayed at the Mahindra & Mahindra pavillion. The vehicle's 14 inch alloy wheels enhance its overall appeal while original mud flaps not only keep the exteriors clean but also add a stylish edge. The sleek chrome muffler cutter is not just a visual treat but also prevents corrosion of the exhaust pipe. The special 'park master' parking sensor beeps to tell you how close you are to an obstacle.

Special grain leather upholstery gives the interiors a rich look and feel, while the wood finish centre console adds a touch of class. The fully loaded accessorised Logan also boasts a complete entertainment system, consisting of a 45 x 4 watt music system, which plays CDs and is MP3 compatible. You can also use the Bluetooth facility and the ipod interface. The unique thermo cooler and warmer allows you to store food and beverages at the temperature of your choice.

The Steppe steps in
With its earthy hues of brown, green and soft blue, the Steppe evokes a feeling of being one with nature. A spacious concept car, it is designed for outings with friends and family. The vehicle has been designed to evoke feelings of warmth, energy and fun. The exterior hues are complemented by the car's interiors which sport an organic trim line, etched leaf textures and tree shadows reflecting a feeling of being one with nature.

The Steppe makes efficient use of space and offers flexi seating options for seven adults with the second and third row seats easily split to create more space. An extra fold-out rear seat only adds to the fun. A special roof rack and storage boxes in the rear allow you to carry more gear for those camping trips, while blue LED lighting adds some extra style to the car. Rear A/C vents, grab pull handles, wheel spokes and a detachable LCD monitor in the rear of the car enhance the Steppe experience.

The company says that the Logan has evoked tremendous response since its launch and is now among the top 3 sedans sold in India. The car has also several accolades since its launch eight months ago in the country. The car has been named 'Car of the year 2007' by Hindustan Times' HT Cars and Bikes, and has also recently won the Business Standard Motoring Jury Award.