In one of the biggest deals in the Indian brick-and-mortar retail space, Kishore Biyani's Future Retail will acquire Shoppers Stop's arm HyperCity Retail India Ltd for Rs655 crore. It is expected that Future will dovetail HyperCity into its retail chain Big Bazaar. 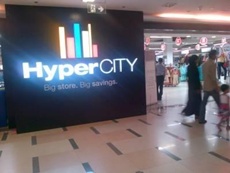 Under the deal announced on Thursday, the transaction value of Rs655 crore will be paid by Future Retail through allotment of shares worth Rs500 crore to HyperCity's existing shareholders, in addition to Rs155 crore in cash.

For Future Retail, it means adding 19 stores, largely in prime locations in the top five metro cities of India, and 1.4 million sq. ft of retail space. For Shoppers Stop, it lets go of a difficult business that was yet to turn a profit and had nearly Rs400 crore of debt.

While the deal value looks muted, Shoppers Stop gets rid of a pain point and can focus on maximising gains from its relationship with Amazon, Moneycontrol points out. For Future Retail, 1.3 million square feet addition (close to 30 per cent of Future Retail's existing area) helps it to augment capacity in one stroke and position its offerings in a premium format, thereby paving the way for a speedier turnaround of beleaguered HyperCity.

''We will continue with what Hypercity has built  Hypercity has built a formidable business in terms of top line. We think we can add something to it. They have a customer base which is quite interesting and which we believe will be addition to our customer base. There are some geography and very good locations,'' Biyani told Times Now in an interview.

In its intimation to BSE, Future Retail said the equity component of the deal includes issue and allotment of 9,310,987 shares (1.9 per cent of Future Retail's share capital) at a price of Rs535 per share, amounting to Rs498 crore. HyperCity's debt, amounting to Rs265 crore, would be transferred to Future Retail. After making adjustments for cash and cash equivalents, the enterprise value of HyperCity is roughly Rs916 crore, implying an EV/Sales multiple of 0.79.

While the deal value is at a discount to the valuation of Future Retail (1.57x EV/Sales) and Shoppers Stop (0.98x EV/Sales), both companies stand to benefit by virtue of this development.

With HyperCity now off its books, Shoppers Stop's efforts will be solely directed at its forte of retailing home accessories and apparel. Furthermore, the recent tie-up with Amazon will enable Shoppers Stop to enhance its online brand visibility, among the other benefits, as stated in one of our previous reports.

The retail major's consolidated financials, negatively impacted by HyperCity's performance over the years, could witness some relief on back of better EBITDA and bottom-line margins (debt repayment to be effected through proceeds received from sale of HyperCity and investments from Amazon).

While Amazon succeeded in joining hands with Shoppers Stop to build its brick and mortar store presence across India, they are likely to leverage this relationship in product categories that are closely identified with Shoppers Stop.

Amazon has been scouting for a partner for foraying into food and grocery retailing, and it may be interesting to see who fits their bill.

HyperCity's impetus is clearly greater on metros catering to the upwardly mobile population, whereas Big Bazaar, the flagship brand of Future Retail, is oriented towards the mass affluent category. The product categories and pricing of these two formats are different.

The cash outgo for the deal is only Rs155 crore and Future Retail can fund this easily from its internal sources without resorting to additional debt, according to Moneycontrol.

Future Retail's plan is to rename a few HyperCity stores to Big Bazaar Gen Nxt in the immediate future owing to a good brand following. Secondly, the company aims to actively commence Fashion Big Bazaar sales from the remaining HyperCity stores to cash in on the growth prospects in the value fashion segment.