Coca-Cola on Friday announced a new recycling initiative under which it will collect and reuse the equivalent of 100 per cent of its packaging by 2030. 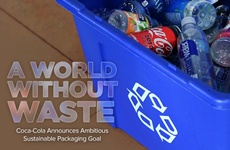 The world's largest total beverage company, which creates massive garbage around the world, intends to back a World Without Waste with a multi-year investment to implement their new recycling goal.

''The world has a packaging problem – and, like all companies, we have a responsibility to help solve it,'' James Quincey, president and chief executive of The Coca-Cola Company, said. ''Through our World Without Waste vision, we are investing in our planet and our packaging to help make this problem a thing of the past.''

The company stressed the recycling would be ''equivalent'' of 100 per cent because "It would be impossible to collect each of the packages we sell globally." So Coca-Cola will make it up by "collecting packaging from other companies".

The company told BuzzFeed News it sells 128 billion bottles per year, and nearly all the plastic bottles are made from new plastic, not recycled.

Yet globally, the average rate of collection of Coca-Cola's bottles and cans by local sanitation systems is 51.5 per cent - which means the problems are both that tons of used bottles never get recycled (ending up instead in landfills, the ocean, and as everyday litter), and that the majority of the millions of new bottles Coca-Cola sells daily aren't made from whatever fraction of plastic does get collected, but from new plastic.

This unending churn all means that every minute there's more plastic junk piling up in the world.

Coca-Cola said in their announcement that for every bottle or can the Coca-Cola system sells globally, they will take one back to be recycled.

This comes after non-profit organisations and environmental advocacy groups, including Greenpeace, criticised the soda brand for creating plastic bottles that end up being dumped in landfills or in bodies water.

Coca-Cola says the latest recycling initiative is one of the steps in their ongoing sustainability efforts. The company says it is building off of its success in replenishing an estimated 100 per cent of the water it uses in its final beverages - finishing its water replenishment goal five years ahead of expectations.

The company will work in partnership with the Ellen MacArthur Foundation's New Plastics Economy initiative, The Ocean Conservancy/Trash Free Seas Alliance and the World Wildlife Fund.

''Bottles and cans shouldn't harm our planet, and a litter-free world is possible,'' Quincey said. ''Companies like ours must be leaders. Consumers around the world care about our planet, and they want and expect companies to take action. That's exactly what we're going to do, and we invite others to join us on this critical journey.''

Earlier this week, McDonalds announced that they planned on producing packaging from renewable, recycled or certified sources to be available in all restaurants by 2025.