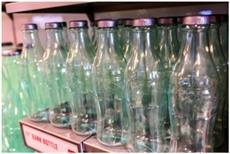 In addition, the companies have reached an agreement for The Coca-Cola Co to acquire AB InBev's interest in bottling operations in Zambia, Zimbabwe, Botswana, Swaziland, Lesotho, El Salvador and Honduras, for an undisclosed amount.

The divestment comes after AB InBev closed its $104-billion acquisition of SABMiller Plc in October, one of the largest-ever mergers in corporate history.

In 2014, SABMiller and Coca-Cola merged their soft drinks bottling operations in South and East Africa with and Gutsche Family Investments (GFI) to create CCBA with $2.9 billion in revenue across 12 fast-growing markets.

CCBA, based in South Africa, distributes about 40-per cent of Coke's volumes in the continent. It is 57-per cent owned by SABMiller, 31.7-per cent by GFI, with Coca-Cola Co holding the remaining 11.3 per cent.

Coca-Cola had retained the right to buy SABMiller's stake in the event of a change of control of the joint venture.

The Coca-Cola Co plans to hold all of these territories temporarily until they can be refranchised to other partners.

With over 30 bottling plants, CCBA is the largest bottler in Africa and serves 12 high-growth countries accounting for approximately 40 per cent of all Coca-Cola beverage volumes in Africa.

Carlos Brito, CEO of AB InBev, said: ''We are happy that we have been able to reach this agreement with The Coca-Cola Company in a timely manner and with a satisfactory outcome for all parties.''

''We are pleased to have reached an agreement quickly that is in everyone's best interests,'' said Muhtar Kent, chairman and CEO of The Coca-Cola Co. ''We will move forward with our long-term strategic plan in these important growth markets. We are continuing negotiations with a number of parties who are highly qualified and interested in these bottling territories and look forward to refranchising these territories as soon as practical following regulatory approval.''