The Narendra Modi government at the centre has come out with a big-bang bonus payout for non-union employees of Coal India ltd (CIL), including executives and managerial staff, while extending a similar scheme for port and dock workers till 2015-16. 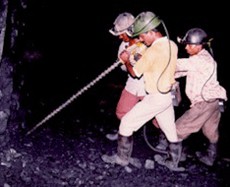 Coal India executives, managerial staff and supervisors who are not union members will get a R500-crore festival bonanza with the cabinet on Wednesday clearing performance-related pay (PRP) with effect from 2007.

CIL employs over 3.3 lakh people, including executives and managerial staff while ports in the country employ over 44,000 peole..

The union cabinet chaired by Prime Minister Narendra Modi approved the recommendations of the committee of secretaries to regularise the 2007 Pay Revision implemented by Coal India Limited (CIL) with effect from 1 January 2007 in the loss-making subsidiaries as well.

The payment would be out of the corpus created by pooling the profits of CIL subsidiary companies, duly setting off the losses of the loss making subsidiaries and stand-alone profits of CIL, excluding dividends received from its subsidiary companies. The payment will be made with the condition that the corpus for payment of PRP should be treated as a yearly corpus with no provision for carrying it forward to subsequent years.

This would ensure equity among executives who are transferable, across the subsidiary companies, and would also help in keeping up the morale of executives working in loss making CPSEs and CPMDIL, according to the release.

''CIL had two loss-making subsidiaries - Eastern Coalfields Ltd and Bharat Coking Coal Ltd - in West Bengal and Jharkhand, respectively. But now that there has been a turnaround and all subsidiaries are in profit, we have made an exception and decided to give PRP to all executives and managerial staff with effect from 2007,'' said Ravi Shankar Prasad, minister for communication and IT, after the cabinet decision.

It ensures equity among executives who are transferable to subsidiaries, Prasad said.

''It was overdue and the government now, in recognition of the performance of CIL in augmenting production, has approved the PRP,'' a coal ministry official said.

The payment of PLR would be made after adjusting the ad-hoc amount already paid for the year 2014-15.

The government proposes to meet the expenditure on account of PLR by the major port trusts and dock labour boards from their own resources without any budgetary support from the government.

This will benefit about 44,000 major ports and dock workers/employees/officer and will help ensure a better industrial relationship and congenial work atmosphere in the port sector apart from stimulating better productivity.

Major port trusts/dock labour boards will be immediately informed on due dates to make payment of the PLR, as per the existing scheme to all employees/ workers/officers for the years 2014-15 and 2015-16, an official release stated.