Cipla Ltd, India's fourth-largest drugmaker by revenue, has sought revoking of Swiss pharma giant Novartis's patent on said on respiratory drug Onbrez over allegedly creating a shortage of the drug in India. 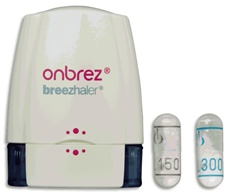 Cipla, which launched a generic version of the drug to boost availability in the local market, said Novartis AG, which has had patents on the medicine since 2008, used to import a "negligible quantity" of the drug from Switzerland instead of producing it in India, thereby creating a shortage of supplies in the Indian market.

Cipla, which mostly manufactures generic drugs, said there was an urgent but unmet need for the respiratory treatment in India and it has started selling a copy of the drug in Delhi at a fifth of the cost of Novartis's product.

"Cipla believes that it has the potential to manufacture adequate quantities of the drug and make the same available in the country," the company said in a statement.

Cipla made the filing about Novartis's patents under Section 66 of the Indian Patents Act, sources at the Department of Industrial Policy and Promotion said.

A spokeswoman for Novartis in Zurich said the company had not received any notice from regulatory or other authorities about the issue.

Novartis, which last year lost a patent on its cancer drug Glivec in India after the authorities allowed Indian firms to launch cheaper copies, is likely to challenge Cipla's action.

India is under criticism by MNC pharma companies for setting limits on patent approvals and its plan to open patented drugs to generic makers.