The US State Department on Tuesday approved the sale of six AH-64E Apache attack helicopters to India, in a deal worth $930 million, a move that could be a big boost for India's defence capabilities. 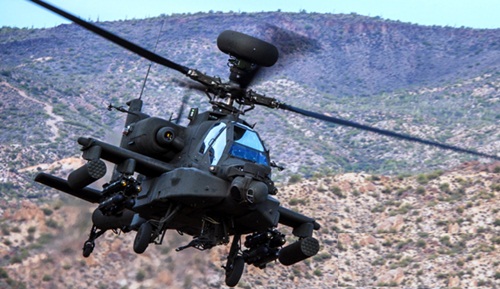 In addition to aircraft, the contract includes night vision sensors, GPS guidance and hundreds of Hellfire anti-armour and Stinger air-to-air missiles, to enable Apache attack helicopters tackle ground-armoured threats to Indian armed forces.
The State Department also approved the sale of four AN/APG-78 Fire Control Radars, 180 AGM-114L-3 Hellfire Longbow missiles, 90 AGM-114R-3 Hellfire II missiles, 200  Stinger Block I-92H missiles, Embedded GPS Inertial Navigation Systems, 30mm cannons, transponders, simulators, training equipment, etc, totally costing around $930 million.
The agreement has been forwarded to the US Congress for approval and if it passes the Congress the contract is expected to go ahead.
Under the deal approved on Tuesday, the Apache attack helicopters will be sold directly to India from US manufacturers. The lead contractors are US arms, aviations and engineering giants Lockheed Martin, General Electric and Raytheon.
A Defence Security Cooperation Agency release said the sale of the attack helicopters — as requested by India — would help in strengthening US-Indian strategic relationship and to “improve the security of an important partner which continues to be an important force for political stability, peace, and economic progress in South Asia.”
The release, however, emphasises that the proposed sale won't alter the basic military balance in South Asia, while it may help Indian armed forces tackle ground-armoured threats.
Meanwhile, a joint venture of Boeing and Tata group will be manufacturing the helicopters in India. Boeing and its Indian partner Tata have already started production of Apache fuselages at a plant in India.
MORE REPORTS