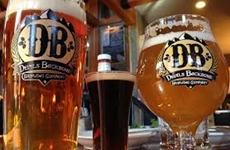 Financial terms of the deal were not disclosed, but Anheuser-Busch said that the transaction is expected to close in the second quarter.

In 2008, founders Steve and Heidi Crandall launched Devils Backbone Brewing Company in the Virginia Heartland, after being inspired by a ski trip to northern Italy in 1991 where they had their first taste of Germanic style beer.

The purchase comes in the midst of AB InBev struggling to gain regulatory approval for its proposed $104.2 billion takeover of rival brewer SABMiller Plc.