The founder and chief executive of Amazon.com arrived at the MARS conference on Monday with a Boston Dynamics robot dog in tow. The dog is said to be the SpotMini robot seen in a recent video opening doors. “Taking my new dog for a walk,” he said in a tweet. 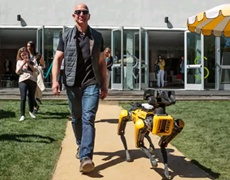 Amazon’s annual conference in Palm Springs, California, is an invitation-only event focused on machine learning, automation, robotics and space exploration.
According to social media, the Amazon chief also played the bottle flip game and led a mini robot parade.
According to commentators, Bezos certainly knows how to make a statement at such events. Last year at the conference, he piloted a 13-foot robot from South Korea’s Hankook Mirae Technology that seemed all primed to take on aliens.
Bezos, who rarely tweets, posted the picture on his Twitter account to his 480,000 followers.
Bezos’ love for robots was seen in another tweet in which he plays the bottle flip game with a robot.
Meanwhile, according to experts while the likes of Bezos may love robots, there may be valid reasons for concern about the development of the technology. Also the most recent season of Netflix’s Black Mirror features a murderous, highly autonomous SpotMini look-alike.
Sam Charrington founder of Cloudpulse Strategies said in This Week In Machine Learning & AI newsletter, while he does not expect the robot uprising anytime soon, “but there’s plenty for us to worry about here — as a society, a culture, and a species.”
He says that autonomous killer robots we imagine instill so much fear because they are autonomous, are driven to kill, for some reason, and they are  armed.
He says killer robots seem like an inevitability and military robots already exist. He points out that many governments are researching and developing more military robots. According to Statista, global spending on military robotics stood at $6.9 billion in 2015, and is expected to grow to $15 billion by 2025.
MORE REPORTS