US telecom giant AT&T Inc, on Saturday struck a mega deal to buy multinational media and entertainment conglomerate Time Warner Inc for $85.4 billion in cash and stock, in what could be the year's biggest, deal but highly-scrutinized acquisition. 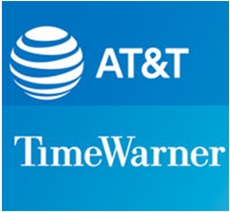 The Wall Street Journal reported on Friday that Apple Inc had approached Time Warner a few months ago about a possible merger.

Including Time Warner's net debt, the AT&T deal is worth $108.7 billion.

Post closing, Time Warner shareholders will own between 14.4 per cent and 15.7 per cent of AT&T shares.

AT&T plans to fund the cash portion of the deal with cash on hand and new debt and and has secured a bridge loan of $40 billion.

AT&T expects to generate $1 billion in annual synergies within 3 years of closing primarily through corporate and procurement expenses.

AT&T will pay a $500-million breakup fee to Time Warner if the proposed transaction is blocked by antitrust regulators.

Its film franchises include Harry Potter, DC Entertainment, and LEGO, while its TV series include The Big Bang Theory, The Voice, and Gotham. The company also owns a 10-per cent stake in video streaming site Hulu.

Time Warner has been a takeover target since the past three years. In 2014, 21st Century Fox, controlled by media mogul Rupert Murdoch, withdrew its $80-billion takeover offer Time Warner rejected the proposal saying that it was worth more (See: Time Warner spurns Murdoch's $80-bn offer).

AT&T had in 2014 entered a joint venture, Otter Media, with the Chernin Group to invest in media businesses, and has rolled out video streaming services

The unit was later acquired by Charter Communications for $56 billion (Charter to acquire Time Warner Cable for $56 bn).

The AT&T-Time Warner deal will combine Time Warner's vast library of content with AT&T's pay TV subscriber base and TV, which is the  world's largest, and mobile and broadband distribution.

Time Warner chairman and CEO Jeff Bewkes said, ''Combining with AT&T dramatically accelerates our ability to deliver our great brands and premium content to consumers on a multiplatform basis and to capitalize on the tremendous opportunities created by the growing demand for video content.''

It also provides broadband subscription television services through its newly acquired DirecTV. It has TV customers in the US and 11 Latin American countries.

AT&T is the largest telecommunications company in the world by revenue, and the world's 17th-largest mobile telecom operator.

The deal has already come under criticism from both the Republicans and the Democrats and various consumer groups since AT&T already has over 100 million subscribers across its wireless, broadband and DirecTV offerings.

Lawmakers are concerned about the limitation of consumer choice since the deal will create a company that creates its own content and provides the means to deliver both its own offerings and of its competitors.