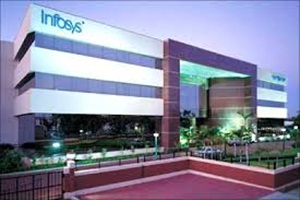 Infosys had reported a net profit of Rs 3,690 crore, up 2.4 per cent, in the previous quarter on year-on-year basis.
The company's revenue from operations increased 12 per cent to Rs19,128 crore.
Gross revenues for the April-June2018-19 quarter grew year-on-year by 12.0 per cent in rupee terms and by 6.0 per cent in constant currency terms while revenues grew sequentially by 5.8 per cent in rupee terms and by 2.3 per cent in constant currency terms.
Operating margins for the quarter stood at 23.7 per cent, at the upper quartile of the guidance.
Infosys saw its digital revenues grow 28.4 per cent to $803 million in the quarter, with a sequential growth of 8.0 per cent and year-on-year growth of 25.6 per cent in constant currency terms.
During the year Infosys secured large deal worth a total $1 billion, of which over 40 per cent was from financial services while its $100 million clients increased sequentially by 4 to 24.
Employee utilization (excluding trainees) stood at an all-time high of 85.7 per cent.
Infosys said its return on capital employed (RoC) increased to 25.5 per cent during the quarter from 24.1 per cent last quarter while free cash flow increased sequentially by 32.1 per cent in dollar terms.
The board of directors of the company at its meeting today approved and recommended a bonus issue of one equity share for every equity share held and a stock dividend of one American Depositary Share (ADS) for every ADS held, as on a record date to be determined.
Consequently, the ratio of equity shares underlying the ADSs held by an American Depositary Receipt holder would remain unchanged. The board approved and recommended the issue of bonus shares to celebrate the 25th year of company’s public listing in India and to further increase the liquidity of its shares.
The bonus issue of equity shares and ADSs will be subject to approval by the shareholders, and any other applicable statutory and regulatory approvals, Infosys stated.
The bonus shares once allotted shall rank pari passu in all respects and carry the same rights as the existing equity shareholders and shall be entitled to participate in full, in any dividend and other corporate action, recommended and declared after the new equity shares are allotted.
The board also appointed Michael Gibbs as an independent director of the company effective 13 July 2018 for a period of three years, based on the recommendation of the Nomination and Remuneration Committee of the Board.
During the three months ended 30 June 2018, on re-measurement, including consideration of progress in negotiations on offers from prospective buyers for Panaya, the company has recorded a reduction in the fair value of disposal group held for sale amounting to Rs270 crore in respect of Panaya. Consequently, profit for the three months ended 30 June 2018 has decreased by Rs270 crore resulting in a decrease in basic earnings per equity share by Rs1.24 for the quarter.
MORE REPORTS