Nandan Nilekani likely to make a comeback at Infosys

Nandan Nilekani, who once switched his top job at Infosys to head the government's Unique Identification Authority of India (UAIDI), is most likely to make a comeback at the IT firm he helped to establish along with Narayana Murthy and six others, say media reports. 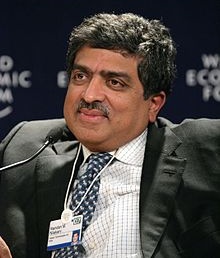 Amidst the confusion following the sudden exit of CEO and MD Vishal Sikka, an investor advisory firm is reported to have favoured Nandan Nilekani being brought back on its board as its non-executive chairman.

However, there is no clarity about how Infosys is looking at the proposal and the nature of his role if he returns, even as media reports said an announcement to this effect is expected in the next 48 hours.

The Institutional Investor Advisory Services (IiAS) said the Infosys board has been "unable to protect its CEO" and to select a successor it must begin by "reinventing itself".

"It must convince Nandan Nilekani to join the board once again, as its non-executive chairperson," it said in a report, while adding that Nilekani should not see this as any other corporate job as Infosys is at the heart of Indian IT and its success will foretell how the sector will position itself for the future.

Even Infosys' ex-CFO V Balakrishnan on Wednesday favoured bringing in Nandan Nilekani as the chairman of the company, saying his experience and understanding of clients made him a "good face" to lead the organisation in the current situation.

Nilekani was one of the seven founders that set up Infosys more than three decades ago and served as its CEO between March 2002 to April 2007.

Sikka, a complete outsider, was brought in as the company's CEO in June 2014, prior to which the position was held by one or the other founder.

Infosys, which was so far been headed by founder directors seems to have found it difficult to accept an outsider changing the course of business midway. That led to the recent spat between Infosys founders and management, leading to the resignation of Sikka.

The board and Vishal Sikka have spent considerable amount of time addressing the concerns - to a point where the company, in its 20-F filing, disclosed distractions from activist shareholders as a possible risk to achieving the company's strategic goals, the report said.

Stakeholders, including large institutional investors, proxy advisory firms, brokerages, top executives at the company and some of the company's 200,000-odd employees find it odd that after CEO Sikka's abrupt decision to quit and the consequent Rs33,074 crore loss in market value, the board opted to lash out at Murthy.

Murthy wrote in a letter dated 9 August to some advisors that Infosys co-chairman Ravi Venkatesan and two other independent directors had told him that Sikka was not CEO, but CTO material.

The board's six-page release on Friday blaming Murthy, who has often referred to Infosys as his ''middle child'', for his ''continuous assault and misguided campaign'' against Sikka has caused heartburn among the five founders.

Murthy has been meeting heads of large institutional investors, mutual funds and a few brokerages over the past month in an effort to build pressure on the board, the second Infosys executive added. He met with representatives from Oppenheimer Developing Markets Fund, the third-largest institutional investor in Infosys in July, this person said. Oppenheimer trimmed its holding in Infosys to 2.16 per cent at the end of June compared to 2.36 per cent.

Amid allegation of corporate governance and uncertainty surrounding Infosys, its co-chairman Ravi Venkatesan on Tuesday met union finance minister Arun Jaitley in New Delhi. Venkatesan is reported to have apprised Jaitley of the developments at Infosys as also the steps being taken to keep the shareholders informed.

However, Infosys was unavailable for any comment on this matter.