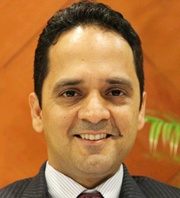 Sandeep Dadlani, Infosys president and head of Americas, a sudden development that is widely seen as a setback for chief executive Vishal Sikka.

Some observers attributed the resignation to growing pressures on the company's top executives to deliver, following a series of unimpressive quarterly performances.

Dadlani, who has been with Infosys since 2001 and who was also the global head of its manufacturing, retail, CPG (consumer & packaged goods) and logistics vertical, posted on LinkedIn that an "out-of-the-world assignment" was awaiting him.

According to The Times of India, sources close to the development said he may be joining Virginia-based confectionery and pet food company Mars, makers of the brands Snickers, M&M's, Twix and Wrigley, in a digital transformation role.

Dadlani, president and head of Infosys' operations in America, was seen as crucial to Sikka's plans. He was one among the four executives who were elevated as presidents last year. Dadlani was the global head of the company's manufacturing, retail and logistics unit, which accounts for around 35 per cent of the IT major's revenue.

In his place, Infosys has brought in two new executives. Karmesh Vaswani has been appointed as the global head of retail, CPG & logistics and Nitesh Banga has been brought in as global head of manufacturing. Both appointments are effective 15 July. Vaswani and Banga are both career Infosys employees who have held strategic portfolios across the organisation for nearly a decade.

Infosys also announced the appointment of Inderpreet Sawhney as group general counsel, effective July 3, 2017. She joins Infosys from Wipro where she was the general counsel. The company also said that Gopi Krishnan Radhakrishnan, who was the acting general counsel of Infosys, will be leaving the company later this month.

Dadlani was among the four executives who were elevated to the rank of president from the position of executive vice president last year along with Ravi Kumar, Mohit Joshi and Rajesh Krishnamurthy. Among the four, Ravi Kumar was also given the role of deputy chief operating officer in January, this year.

The resignation of Dadlani comes as a setback to Infosys as the company's senior management had shown signs of stability in the recent past.

During the early days of Vishal Sikka's term as CEO that began August 2014, Infosys had witnessed a major top management churn with nine executive vice presidents leaving the company. During this period, Sikka he also brought in numerous executives from his previous organisation SAP.