Former chief financial officer of Infosys Rajiv Bansal is fighting for the portion of his controversial severance pay that the company has held back. 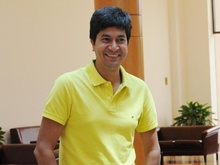 Bansal has invoked his rights to an arbitral tribunal, and former Supreme Court judge R V Raveendran has been appointed sole arbitrator in the case. The first arbitration meeting is scheduled in May, reports today said.

When Bansal was leaving the firm in 2015, Infosys had agreed to pay him a Rs17.38 crore severance package - the equivalent of 24 months' pay. But it paid only Rs5 crore and halted the remaining payment. Infosys then said the agreement with Bansal had provided for non-compete obligations, as also other rights and obligations.

"Certain payments to Rajiv under the agreement have been suspended pending certain clarifications with regard to such rights and obligations," it had said in a statement.

It is widely believed the payment was suspended following objections, especially from some of Infosys's founders, that the amount was excessive. Co-founder N R Narayana Murthy had said such payments may be viewed by some as "hush money" and castigated the board for not having made all disclosures with respect to it.

Earlier this year, Infosys admitted an element of subjectivity had influenced the quantum of severance pay granted to Bansal and that it had since then put in place a policy to ensure that there would not be a repeat of it (See: 'Bansal pay-off a judgment call, may have been wrong').

Asked about the arbitration move, Infosys said it has already clarified on the severance package for Bansal through a detailed statement. "We do not have anything additional to add at this point," it said.

Bansal is said to have chosen arbitration over court proceedings because he believes it will provide for speedier determination of the issue and the proceedings will be private and confidential. The Arbitration Act provides for time bound arbitrations.

Karthik Mahalingam of law firm Shardul Amarchand Mangaldas, told The Times of India the provision for severance pay is of recent origin and its terms seem to vary based on specific circumstances. "We have typically seen HR disputes arise with respect to senior hires, in case of issuance of ESOPs and defaults of nonicompete clauses," he said.