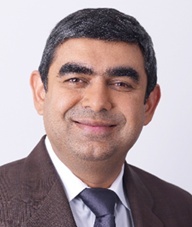 The company had posted a consolidated net profit of Rs3,708 crore in the sequential quarter ended 31 December 2016.

Consolidated revenue of the company also declined 0.89 per cent quarter-on-quarter and 3.44 per cent year-on-year to Rs17,120 crore for the quarter under review.

Consolidated net profit for the financial year ended 31 March 2017 stood at Rs14,353 crore showing a growth of 6.4 per cent.

The total dividend payout amounts to Rs49.6 per cent of post-tax profit and 63 per cent of free cash flow for the financial year 2017.

The board also proposed to pay up to Rs13,000 crore (about $2 billion) to shareholders via dividend or share buyback in FY18.

The company guided for a revenue growth of 6.5-8.5 per cent in constant currency terms, against the 8-10 per cent growth projected by Cognizant during calendar year 2017.

The board, at its meeting today appointed Ravi Venkatesan, independent director as co-chairman of the board. Ravi Venkatesan, who has been on the board of Infosys since April 2011 has made valuable contribution to the development of strategic direction of the company during his tenure.

''Ravi will help me enhance the board engagement in supporting the Management in execution of company's strategy'', said R Seshasayee, chairman of the board. ''This is an exciting time for the technology industry and I am delighted to have the opportunity to work more closely with Sesh and with Vishal and his leadership team in their transformational journey'', said Ravi Venkatesan, co-chairman.

''Strong client resonance, and our employee engagement continued to drive down attrition, especially with top performers,'' said Vishal Sikka, CEO. ''Looking ahead, it is imperative that we increase our resilience to the dynamics of our environment and we remain resolute in executing our strategy, our path to transform Infosys, and to drive long term value for all stakeholders.''

''Attrition declined during the quarter reflecting our focus on better employee engagement. Utilization during Q4 reached 82 per cent which is the highest in Q4 over the past several years'', said U B Pravin Rao, COO.

''In FY 17, operating margins were steady as we continued our sharp focus on operational efficiencies. Cash provided by operating activities during the year was robust and exceeded $2 billion, a new high'', said M D Ranganath, CFO. ''Our capital allocation policy is aimed at balancing the strategic and operational needs of the company as well as enhancing shareholder returns''.