Infosys on Friday reported a better-than-expected 16 per cent rise in fourth-quarter consolidated net profit, which rose to Rs3,597 crore ($540.07 million) during its fiscal fourth quarter ended 31 March2016, from Rs3,097 crore a year earlier. 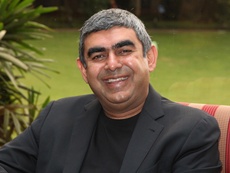 Its revenue rose 23.4 per cent to Rs16,550 crore, even as the company reported an unbeaten fourth straight quarter of rising income and profit.

On sequential basis, Infosys' net profit rose 3.8 per cent from Rs3,465 crore in the October-December quarter while revenue was up 4.1 per cent from Rs15,902 crore during the quarter.

"I am proud of our company's achievements in my first fiscal year as CEO of Infosys. At the same time, I am humbled by the task that is still in front of us. And yet despite these heartening results, they are still based on metrics of the past, of the way the industry has been," Vishal Sikka stated in a press release.

Sikka, CEO and MD of Infosys, has set a target of achieving $20 billion revenue in 2020.

A report published in The Hindu, in May 2015, quoted a letter Sikka wrote to Infosys shareholders, in which he said that revenue per employee will be raised to $80,000 through automation and innovation. The aim was to bring in at least 30 per cent improvement in productivity, the report said.

The company's earnings rose 10.68 per cent. "Over the course of this year, we saw this strategy of bringing automation and innovation to our clients, on a foundation of learning and education, start to show results in the organic growth of our client relationships, in our win rates in large deals, and in the types of projects we are seeing in strategic areas where we never participated before," Sikka has said.

In August 2015, Sikka had announced new services - Aikido - to increase the focus on design thinking, platforms and knowledge-based IT. In the term Aikido, "Ki" is a large scale modular service to help renew enterprise landscapes, "Do" refers to the service offering on design thinking and design-led initiatives and 'Ai' refers to platforms as a service to build intelligent solutions. Clearly, his strategy seems to be working.

''Employee attrition reduced further in Q4, and is reflective of increased engagement with our people all through the year, and our steps to make Infosys an exciting place for the world's best talent. We continue to reimagine our internal processes to increase organisational agility,'' U B Pravin Rao, COO, stated in the press release.

Sikka had given out-of-turn promotions and hikes to the staff in a bid to retain talent even as he focused on innovation and automation.