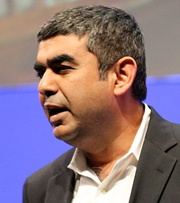 Infosys beat street expectations by posting a consolidated net profit of Rs3,250 crore in the third quarter ended 31 December, a 13-per cent rise over Rs2,875 crore posted during the same period of last year.

The company's revenues rose 5.9 per cent from the year-ago period to post Rs13,796 crore, even as the Bengaluru-based company maintained its guidance of 7 per cent to 9 per cent, the company said in a statement.

''Our 'renew and new strategy' is being received well by our clients and our ecosystem and we are already seeing its early adoption,'' said Vishal Sikka, CEO and managing director.

''Based on our strong performance, we are intensifying our efforts to deepen employee engagement, client ecosystem and strengthen our foundation of education as we build a next generation services company that innovates for consistent profitable growth.''

''Infosys's net profit ahead of our expectations and topline came in line with our estimates. The company surprisingly reported robust volume growth of 4.2 per cent quarter-on-quarter. The management has kept its FY15 dollar revenue growth guidance unchanged at 7-9 per cent at September 30 exchange rates,'' said Ankita Somani, research analyst at MSFL Research.

Infosys has expanded its innovation fund from the current $100 million to $500 million to support the creation of a global eco-system of strategic partners, it said in a statement.

''During the quarter, we saw broad-based volume growth, increased utiliSation and strong client additions. We have made 100 per cent variable payout for the quarter and have seen a further decline in attrition as a result of multiple initiatives taken over the last few quarters,'' said U B Pravin Rao at Chief Operating Officer.