Infosys Ltd, seeking to regain its bellwether position in the Indian IT industry, has taken the unusual step of recalling retired chairman emeritus Narayana Murthy to head the board again as executive chairman. 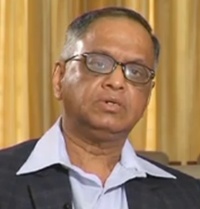 Infosys announced late on Friday that Murthy has been appointed executive chairman and additional director with immediate effect. He will be paid a token compensation of Re1 a year.

K V Kamath, the present chairman of the board, will step down and will be the lead independent director.

Kamath said in a press release that the board has taken this step keeping in mind the challenges that the company is facing and in the interest of all stakeholders.

"Murthy's entrepreneurial and leadership record and the long experience he has had as a technology pioneer makes him eminently qualified to lead the company and provide strategic direction at this point in time," he said.

Accepting the responsibility, Murthy has said the call was "sudden, unexpected, and most unusual", adding, ''I would do my best to add value to the company in this challenging situation".

He also said, "Infosys is my middle child. Therefore, I have put aside my plans-in-progress and accepted this responsibility. I am grateful to K V Kamath, the board, and every Infoscion for giving me this opportunity."

Murthy founded Infosys in 1981 and remained its chief executive officer for 21 years. He had set up the company with an initial capital of Rs10,000 taken from his wife Sudha Murthy.

Murthy was succeeded by co-founder Nandan Nilekani in 2002.

At Infosys he articulated, designed and implemented the global delivery model for IT services outsourcing from India.