State-owned refining and oil marketing company Indian Oil Corporation Ltd (IOC) plans to lay an LPG pipeline from the Gujarat coast to Gorakhpur in eastern Uttar Pradesh making it the nation's longest gas pipeline to cater to the growing demand for cooking gas in the country. 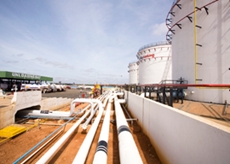 IOC plans to carry LPG and transport the fuel from the Kandla port in Gujarat to Gorakhpur via Ahmedabad (in Gujarat), Ujjain, Bhopal (in Madhya Pradesh), Kanpur, Allahabad, Varanasi and Lucknow (in Uttar Pradesh).

The 1,987-km pipeline will carry 3.75 million tonnes per annum of LPG, IOC said in an application to the sector regulator PNGRB seeking approval for the pipeline project.

Besides imported gas to be fed into the pipeline at Kandla port, IOC will also feed LPG from its Koyali refinery in Gujarat to the pipeline.

Once completed, this will be the biggest LPG pipeline in the country. GAIL currently operates a 1,415-km pipeline from Jamnagar in Gujarat to Loni, in Gaziabad in UP, to transport 2.5 million tonnes of LPG annually.

IOC currently operates a 274-km pipeline from Panipat in Haryana to Jalandhar in Punjab.

"The demand for LPG is increasing consistently in recent year. Further, due to government of India's emphasis to make LPG - a clean and environmental friendly fuel - available to every domestic household in the country, LPG demand is expected to increase at much steeper rate in the coming year," IOC said in the application.

IOC expected the LPG deficit – the difference between what its refineries produce and the demand - to reach about 10 million tonnes per annum by 2031-32.

LPG demand has grown 10.5 per cent this fiscal with just about half of the 8.4 million tonnes consumed being locally produced.

"Considering the deficit figures for LPG, it is essential to import LPG at the nearest port and then transport it to the bottling plants through the most economical modes," IOC said.

IOC said it is building additional import capacities at Paradip, Cochin and Kandla to meet the increasing requirements of imports.

The proposed pipeline will connect eight of IOC's LPG bottling plants in Central and Northern India.

The Petroleum and Natural Gas Regulatory Board (PNGRB) has sought 'expression of interest' from companies wishing to take capacity in the pipeline. 25 per cent of the capacity will be reserved for third parties.