The battle-scarred Heritage Wing of Mumbai's iconic Taj hotel, gutted during the 26/11 terrorist siege, is all refurbished and set to reopen on Independence Day, 15 August. 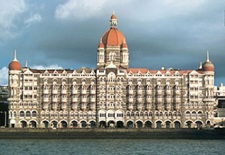 Born as India's answer to British pride, the hotel built by Jamsetji Tata opened its doors in 1903 to 17 guests.

A century later, tragic circumstances forced the Taj to shut its doors for the first time since it opened. But the staff and the management seem to have managed to use this to their advantage by refurbishing the wing to match the best hotels of the world.

After the terror strike, the hotel was opened in stages and by September this year, it will be fully functional. Although most of its rooms in the palace wing will accommodate guests on Independence Day, some of its opulent spaces - like the Tata Suite - will be unveiled in a month or so.

A night's stay at the Tata Suite, formerly the Presidential Suite, complete with butler service, would set one back by Rs7 lakh. There are more than 40 suites in the heritage wing of the building, with some of them being named after marine motifs, given the sea-front location.

While it may be difficult for a visitor to spot the small differences, the management has fine tuned the hotel's interiors. For instance, the ceiling in the Taj Palace lounge has been lowered by eight inches, and its spacious rooms are now soundproof.