The National Green Tribunal (NGT), India's apex environmental court, has ordered authorities in the national capital Delhi to remove all diesel vehicles that are 10 years and older out of the city's streets. 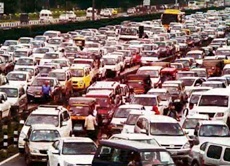 The NGT on Monday directed the Regional Transport Office (RTO) in Delhi to de-register all diesel vehicles that are more than 10 years old with immediate effect.

"We hereby direct RTO, Delhi to deregister all diesel vehicles which are more than 10 years old," a bench headed by NGT chairperson Justice Swatanter Kumar said.

The NGT asked the Delhi administration to issue a public order in this regard and to supply it a list of vehicles that are over 10 years old to Delhi Traffic Police to take appropriate steps.

The NGT's latest ruling, which follows an earlier order by the Supreme Court banning fresh registration of diesel-run vehicles in the national capital, is part of the authorities' efforts to clean up Delhi's polluted air, which is the world's 11th dirtiest, according to the World Health Organisation.

The ruling is the latest in a series of court-issued orders targeting the automotive industry's role in polluting Delhi's air, which the World Health Organisation said in May was the world's 11th dirtiest.

The NGT move is another blow to owners of old vehicles that are tax-paid for 15 years under the existing Motor Vehicles Act and automobile majors such as Toyota Motor Corp, Mahindra & Mahindra and Tata Motors derive a major part of their income from diesel-driven vehicles.

Experts say today's NGT ruling is "quite unplanned and arbitrary" and could be challenged in a court as happened in Kerala, where a similar NGT order has been stayed by the state high court (Kerala HC stays NGT order against diesel vehicles).